A vacuum cleaner’s real-world performance is essential when shopping around for such a machine. Vacuum cleaners’ performance can be measured by looking at various parameters. When trying to find out if the best model for you, such data is good to know, along with the reviews by purchasing customers, of course.

On the other hand, many manufacturers use the specifications of their vacuums to promote new models as ‘just the right model for you’ (logically – they want to sell as many vacuums as possible), often hiding certain details that can play a key role in deciding whether a certain model is the right for you or using hard-to-decipher terms to further confuse the customer.

So, lets see what the most common vacuum cleaner specifications mean.

A vacuum cleaner’s performance can be measured through various parameters, but not all of them are useful when determining suction power and the value of a model:

To avoid that, many manufacturers keep the air flow speed within certain limits, but use various power tools like spinning brushes and similar other technologies to increase the cleaning prowess of their vacuums, without increasing motor power.

– Airflow (often listed as CFM), measured in liters per second (l/s), cubic meters per minute (m3/min) or cubic feet per minute (ft3/m) (one cubic foot equals to 0.0283 cubic meters or 28.3 cubic liters) is the amount of air that flows through the vacuum at any given moment.

This parameter can be determined by multiplying the cross section area of the cleaning head (or any other part where air flows in) and the air speed at a given point. The larger the airflow, generally, the greater the ‘cleaning’ power, but also the larger the volume of air that needs to be filtered before it is released into the cleaning area.

Higher airflow hence requires larger filters, larger and stronger motors, and thicker cables … But a powerful motor also means that the vacuum cleaner’s components will wear out faster than a less powerful unit.

– Suction pressure (aka Water Lift or Sealed Suction), which is measured in centimeters or inches of water lifted or in pascals (Pa). This is the maximum difference in pressure that a vacuum cleaner can create. Typical domestic vacuum cleaners can create suction of 20 kPa (Pascal is a measure of pressure that equals to pressure of 1 newton of force per square meter of area) – 20 kPa would be 20000 N/m2 or around 2 tons per square meter, or around 200 cm (80 inches) of water.

The higher the suction pressure, the easier for the vacuum to pick quickly up large bits of debris it is. More powerful vacuum cleaners generally have more suction pressure but at the expense of airflow, as the two parameters are inversely proportional. And since you can’t have them both, look for a vacuum cleaner that manages to create a good balance between the two.

For instance, a less expensive vacuum cleaner with a higher airflow (around 120 – 140 CFMs) has a strong motor but lower suction pressure (around 50-60 inches of water). This means that this type of cleaner will have a hard time at pulling up large chunks of debris.

Fortunately, there are more expensive models known as “two-stage,” which can hit the right balance between airflow and suction pressure, but at the price of a less powerful but quieter motor. Pricier two-stage vacuum cleaners can deliver 80 inches or more as suction without sacrificing the CFM by a large margin. The ideal airflow in this case would be 100 or more.

The previous vacuum, with 50-60 inches of pressure, is an older, one-stage model. When shopping around look for the more advanced models as they are the best investment in the long run. What’s more, don’t overlook two-stage models just because they have less of a powerful motor than their predecessors.

A less powerful motor means that the vacuum cleaner is quieter, which is ideal for households with edgy pets, small children, or difficult neighbors, and that the motor has a longer life. Durability and suction power should be the two key factors you should be looking for when purchasing a new vacuum cleaner.

Important note: To date, the strongest suction pressure in a vacuum cleaner is 200 CFM, but that number was pulled off by the manufacturer without any attachments and accessories added to the unit. CFM tends to decrease as you add the accessories (vacuum head, hose, and even a HEPA filter). It is estimated that a quality (thick) HEPA filter can decrease the CFM by up to 30%. 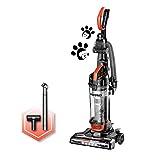 – Output power (often listed as Air Watts) is power measured in watts of the airflow at the end of the cleaning hose. Often, this unit of measurement is called Air Watts (AW). The ratio of output and input power gives the effectiveness of a vacuum cleaner in percentages (%).

Many manufacturers use Air Watts as a unit of measurement for a vacuum’s suction power. Other manufacturers may use CFM, Amps, HP, and Watts. An air watt is a watt needed to carry a unit of air through the vacuum cleaner.

If you don’t know how many air watts a model has, you can calculate it by multiplying 0.117254 with the airflow (in CFM) and with the suction pressure (in inches of water). Air Watts are the most surefire way of finding out the real suction power of a vacuum cleaner.

An upright vacuum cleaner that does its job excellently should stand at 100 AW or more, while  a canister vacuum cleaner should have at least 220 AW. Canisters need more air watts because the distance between the vacuum’s nozzle and the dust container is longer than that in an upright.

In other words, horsepower, Watts, or Amps are useless when determining what vacuum cleaner could bring the biggest bang for your buck in the long run, so stop shopping around these parameters.

– Input power is consumption of energy of the vacuum cleaner. This is not the actual power of vacuum cleaner due to loses in the system and level of effectiveness in general.

In North America vacuum cleaner manufacturers often state the vacuum’s current in amperes (for example, ’12 amps’) and in order to get wattage that must be multiplied by the line voltage (120V). So, ’12 amps’ vacuum cleaners consume around 1440W (or 1.4 kWh) of electrical energy.

Note: Line voltage in Europe is 220V, so don’t use vacuum cleaners if they are designed for different markets, unless you have vacuum cleaner that has manual or even automatic voltage switch. In 2014, EU limited vacuum cleaners’ power to 1600W and from 2017 the input power was further reduced to 900W.

Other specifications include parameters not directly related to the performance:

– Weight in kilograms (kg) or pounds (lb). One pound equals to 0.453 kg. Lighter vacuum cleaners are easy to maneuver with and often, due to their smaller sizes, can reach tight spaces. On the other hand, they often lack power and filtering capabilities of the larger, but heavier models.

Upright vacuum cleaners often have swiveling cleaning heads, enabling them to reach tight spaces despite their sizes and cylinder vacuum cleaners usually have hoses with several add-ons that can reach practically everywhere.

– Noise in decibels (dB) determine noise of vacuum cleaner. Especially silent vacuum cleaners can be used in the room while kids are sleeping, while noisier models will wake up half the city 🙂 Stay away from anything noisier than 80dB (75dB).

Vacuum cleaners with noise levels below 60dB are great, but most of them are between 65 and 75dB.

Note: Library or computer noise is around 40dB.

– Filtration system: We recommend using only quality HEPA filters even though they may cost much more than standard filters. HEPA filters last up to five times longer than their cheaper counterparts and are able to trap airborne particles inside the vacuum down to 0.3 microns, which means that it can trap most allergens.

Steer clear of knock-offs or products that are labeled as “HEP-type” or “HEPA-style” as they are not the real deal.

– Power cord length – A longer power cord means more freedom when vacuuming and changing outlets less. Most of the models have some sort of automatic winding mechanism, so after vacuuming, power cord is stored in seconds, literally.

– Hose length (if applicable) – enables certain models to reach tight spaces. It is easier to maneuver with vacuum hose with power head than with whole vacuum cleaner. On the other hand, due to air friction inside the hose, power loses are somewhat increased.

The Best Vacuum Cleaner Under $100 and How To Pick One